She graduated from the Philosophy Department of Istanbul University in 1959 and started working in the same department as assistant of Prof. Dr. Takiyettin Mengüşoğlu. She received her Ph.D. in 1965 with the thesis on "Schopenhauer's and Nietzsche's Conceptions of the Human Being". Between 1965-1968 she worked at Atatürk University, Erzurum, in which she gave courses of philosophy, latin and poetry.

In 1968 she joined Hacettepe University, in which she established the Department of Philosophy in 1969 and chaired until 2003. She became associate profesor in 1970 and full profesor in 1978. She also established the Centre of Research and Application of Human Rights at Hacettepe University in 1997 and started concudting an M.A. and a Ph.D. programme in human rights.

Ioanna Kuçuradi, who also holds a UNESCO Chair for Philosophy and Human Rights since 1998, is at present the Director of  the Human Rights Centre of Maltepe University and of the M.A. Programme of Human Rights. 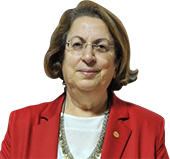 She graduated from the Sociology Department of Hacettepe University in 1978. She received her M.A. in 1982 and her Ph.D. in Philosophy in 1989 from the same University. After she worked as research assistant at Hacettepe University between 1979-1990, she joined Uludağ University (Bursa), in which she established the Department of Philosophy. She became associate professor in 1994 and full professor in 2001. Her publications include The Problem of Metaphysics Today, The Problem of the Human Being in Heidegger, Philosophical Anthropolgy and Enlightment in the Republican Era and many essays focusing on problems of anthropology, value theıry, ethics and philosophy of art.

Prof. İyi, who works at present in the Philosophy Department of Maltepe University, is also a member of Executive Committee of the Philosophical Society or Turkey.

Prof. Hülya Şimga got her bachelor’s degree in philosophy at Boğaziçi University. She then went to the USA and did her master’s and Ph. D. in philosophy at Duquesne University. She is currently a faculty member at Maltepe University, holding a double appointment in the Philosophy Department and the Human Rights Centre. Her work concentrates on gender studies, women’s human rights and ethics. She serves as a board member in the Philosophical Society of Turkey and Kuçuradi Philosophy and Human Rights Foundation. She also served as the Vice-Director of Gender Equality Division of Turkish National Commission for UNESCO (2014-2018). She has a book (A Question for Humanity: Sexism, Oppression and Women’s Human Rights) forthcoming from Lit Verlag as well as articles published in journals such as Philosophia: International Journal of Philosophy and Asian Journal of Women’s Studies. At present she is associate professor in the Human Rights Centre of Maltepe University. Her main areas of work are philosophical anthropologhy, ethics, human rights, existentialism and contemporary philosophy.