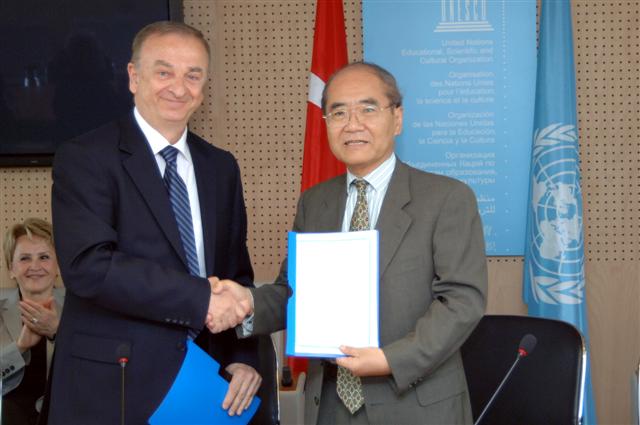 On 13 May 2009, the Director-General of UNESCO, Mr Koïchiro Matsuura, and the Rector of Maltepe University, Istanbul, Turkey, Professor Kemal Köymen, signed an agreement establishing a UNESCO Chair in Philosophy and Human Rights at Maltepe University.

Also attending the ceremony, which took place at UNESCO's Headquarters in Paris, was Professor Ioanna Kuçuradi, responsible for the Chair.

The Director-General congratulated Turkey for its constant support of UNESCO's objectives and programmes to promote philosophical reflection and dialogue in the world. In this regard, the Director-General recalled that Turkey had been very successful in organizing the celebrations for the 2007 World Philosophy Day in Istanbul, and that Maltepe University had significantly contributed to the 2008 celebrations of the 60th anniversary of the Universal Declaration of Human Rights. "Establishing the Chair today is another significant step in contributing to the achievement of the universal objectives and ideals of the Declaration", underlined Mr Matsuura.

The Director-General went on to underscore the importance of philosophy in responding to critical global challenges and fostering dialogue on emerging social issues. "Through philosophical dialogue, philosophy teaching and

promotion of philosophical thought and research, we can reinforce the contribution of the social and human sciences to the promotion of a culture of peace and dialogue", concluded Mr Matsuura.

The Rector of Maltepe University thanked the Director-General for his support and emphasized the fact that the establishment of the UNESCO Chair would greatly facilitate cooperation with other universities, at the national and international levels, for the promotion of research in the fields of human rights and philosophy. Professor Kuçuradi insisted on the pressing need to promote human rights education, with special emphasis on important contemporary issues, such as freedom of expression and  respect for cultural diversity.